For the first time this series, we hosted a double-partner webinar, and it was all about heating up your properties. Be Modern and their National Account Manager, Steve Gent, kicked things off, before a second half appearance from Alex Thomas of Worcester Bosch (yes, the football is on).

Fireplaces have been the missing piece of the puzzle in our product offering and it’s something that’s long been suggested by members on the phone, email and on social media – so we’re delighted to have finally got this one signed off!

We launched with Be Modern a few weeks ago and have let you get a bit of a feel for them before plonking them in front of the camera on a Wednesday evening, which is a rarity indeed!

Anyway, you can watch Be Modern’s part of the webinar above, or you can read the key talking points below.

Let’s be honest here, it’s difficult to list famous fireplace manufacturers off the top of your head but trust us when we say Be Modern are at the top of their game.
Be Modern have been in the business for a long time now, established in 1964. It should come as no surprise either that they originate from the North East, a notoriously cold part of the country, with a historical demand for fireplaces alongside the standard heating system.

To trust a manufacturer though, you need badges and certifications to put your mind at ease. Luckily, Be Modern have those in abundance – including the FSC & Quality Certifications.

And when Brexit finally hits, it’s handy that these products are made in Britain, so you won’t have to fork out on that additional shipping cost.

To avoid any confusion, Be Modern is the brand name for fireplaces and Broseley is for the stoves – they also do bathroom furniture too, but we’ll save that for a later date (30th June).

One of the key selling points of their electric fires and stoves is their ease of installation, and it’s quite literally plug and play as Steve kept saying during the webinar. So often with heating though, you see your pennies flying out through wasted energy. However, their electric products are 100% efficient.

By nature, 100% efficiency means that you’re certainly getting your money’s worth – but how much is that exactly? Steve reckons that at a maximum heat output, it costs 30p per hour. That’s not just a figure plucked out of thin air, that’s based on Electric input x Electric tariff, using an example tariff of 15p per kWh with a 2kW output heater.

Be Modern is a brand name, not a demand. So, for those looking for something a little more traditional, Be Modern have plenty of gas fires and stoves to choose from.
As always though, not every property is the same and as such, some are more suited to gas – but there’s a few extra precautions to take with these ones.
Harping back to the certifications, all their fires are UKCA approved. Usefully, they’re fitted with a flame failure device, meaning that when the flame goes out, the gas supply will automatically shut off. Coupled with this, the fires have an oxygen depletion sensor, which shuts off the gas supply when the oxygen is level is too low.

They’ve done their bit in terms of safety, but there’s still a few things you need to do. This includes getting the fireplace or stove serviced once a year, and if it’s multifuel, they should be swept once a year. Despite being a profession that’s drifted a bit into obscurity, there’s still chimney sweeps you can hire that aren’t tiny Victorian children.

Unsurprisingly, the gas fires are not quite as efficient as electric. Through Steve’s trusty mathematics, you can expect a 3.4kW heat output from a gas input of 4.3kW, costing a bit less on average on 21.5p per hour – there’s really not much in it.

We’ve given you a bit of a taster of the range, but before choosing a fireplace, you need to decide where the surround is going to be installed – the surround is basically the framework behind the fireplace, surrounding it (no shocks here). Be Modern have a range of surrounds that are available to view on their page on the website, which we’ll get to a bit further down.

In technical terms, this is the rebate – the distance from the wall to the front of the back panel. There are two options which are shown in the image below. 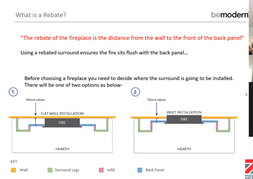 As it’s been official for a few weeks, you can buy these fireplaces and stoves right now! Because you all have different tastes, it was pointless to dedicate a section to every single product though. During the webinar, Steve gave a brief overview of each one, but we highly recommend visiting the Be Modern page on our website to view the full product range and specifications for yourself.

To get your hands on their products, follow the usual purchasing process through Wolseley, which is through branch, online or our new National plumbing & heating support contacts. As always, refer to the Wolseley price list to ensure you’re getting that exclusive contract price.

And that’s your lot! You can learn more about Be Modern here.